The degradation of the dielectric properties of SiO2 films as their thickness decreases below few nanometers has led to intense research activities on high dielectric constant materials. Among those, silicon nitride has received much attention lately. We have investigated the dielectric properties of silicon nitride thin films with thickness below 6 nm, using density functional theory. We found a substantial decrease in the static dielectric constant of crystalline films, as their size is reduced, although its value remains larger than that of SiO2. The variation of the dielectric response in proximity of the surface plays a key role in the observed decrease.

Gold-thiolate interfaces at the nanoscale 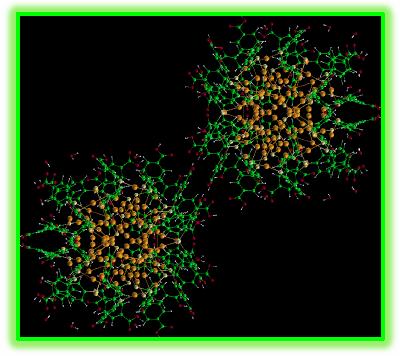 We have performed ab initio calculations of the structural, electronic, and bonding properties of thiolate-covered gold nanoparticles, simulating the exact same structure crystallized experimentally. Our results confirm the stability of the observed structure, and show a tendency of the adsorbate to exert “pull-out” forces on the surface gold atoms. We found that the crystallized structure is a semiconductor, with an energy gap that appears to be insensitive to the type of adsorbate. Comparisons between adsorption energies in the case of gold nanoparticles and flat surfaces show that a finite curvature of the interface enhances the stability of Au−S bonds. 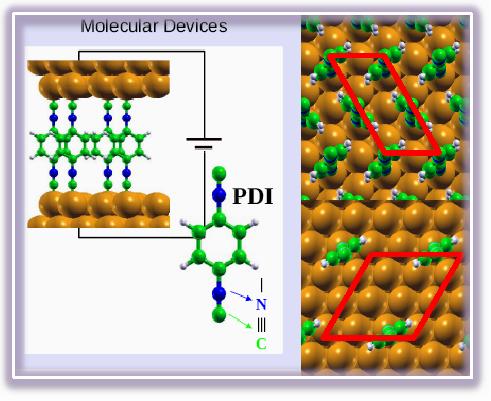 Molecular assemblies comprising aromatic rings have received widespread attention as possible components of molecular electronic devices. An essential prerequisite to understand their stability and transport properties is the microscopic characterization of the interface formed with the metallic leads. We have studied the structural and electronic properties of PDI on Au(111). We find that it is essential to include both quasi-particle corrections and surface screening in order to provide a reasonable estimate of the energy level alignment at the SAM−metal interface.